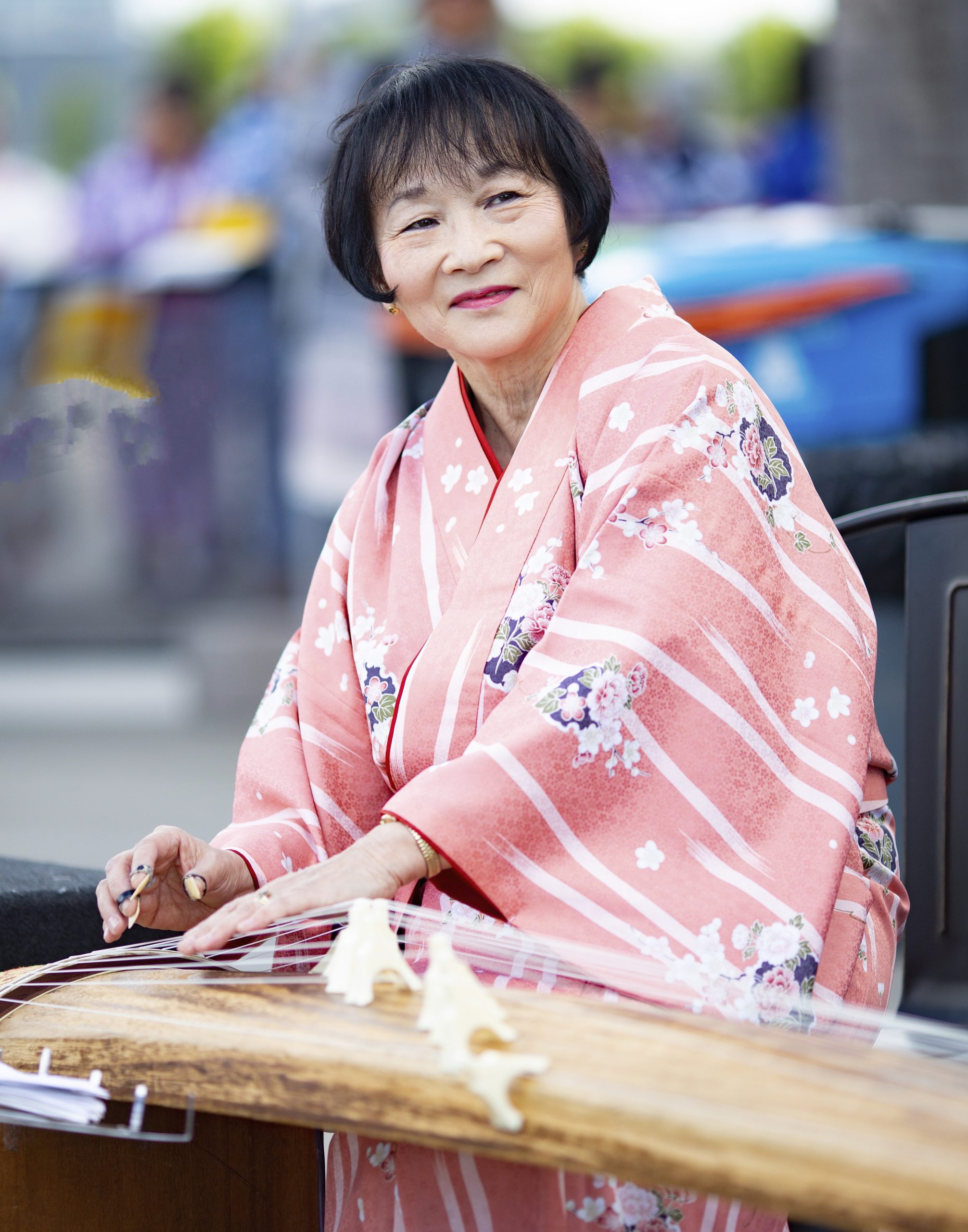 Shirley Kazuyo Muramoto is known as a musician of traditional Japanese music and has studied classical Japanese koto music extensively with several masters, including Chikushi Katsuko, Kazue Kudo, Yoko Gates and her mother, Kazuko Muramoto. She also plays jazz koto and is the director of the Murasaki Ensemble which features music from traditional to contemporary to jazz and rock, established in 1998. Shirley has performed with famed musicians Chikushi Katsuko, Sawai Kazue, Souju Nosaka Keiko, June Kuramoto, Kazue Kudo, Pete Escovedo, Maurice Jarre, and appeared on recordings with David Grisman, Lori Lewis, Elias Negash and Joe Craven, among others.

Shirley earned her “Shihan” degree (instructor’s credentials) with “Yushusho” (highest) honors and her masters “Dai Shihan” from the Chikushi Kai School based in Fukuoka, Japan. Shirley teaches koto privately and through virtual formats using the base curriculum of Chikushi Kai repertoire and traditional koto music. Shirley’s musical training includes playing the violin through her public school days in Oakland, and classical guitar at the college level. With this diverse musical background of Japanese and western music, Shirley has composed and written many arrangements for koto to suit the needs of the diverse artists she has collaborated with through the years.

Because Shirley started performing as a little girl following her mother who was also a koto teacher, she has played koto for over 60 years all over the Bay Area, across the U.S. and in Japan.  During the pandemic, she learned to teach and perform via virtual formats, and also produced streamed programs such as the cultural series “NextGen Geijutsuka: Future Stars of Japanese Cultural Arts”, and “A Tribute to Sahomi Tachibana: American Legacy of a Japanese Dancer”.  Recently, she curated Japanese koto programs for Nikkei Matsuri, the Consulate General of Japan and the Old First Concerts concert “Music of Kimio Eto”. In 2021, Shirley was asked to curate a virtual program with the San Francisco Symphony, “CURRENTS” series, which was conceived by the late Oakland Symphony conductor Michael Morgan. In February 2022, she performed at SFJAZZ with jazz harpist Destiny Muhammad. Shirley kept active even during the pandemic.

Shirley’s mom’s story of learning to play the koto at Topaz and Tule Lake camps during WWII led her to research Japanese traditional cultural arts in the WWII camps. The decades long project was awarded funding in 2012 to turn the research into a documentary film. The film “Hidden Legacy: Japanese Traditional Performing Arts in the WWII Internment Camps” was released in 2014 and is one of the few sources of information about how cultural arts thrived in the camps.  It is now available for free viewing on YouTube.  Shirley and her colleague, Prof. Minako Waseda of Kunitachi University, are currently transcribing all the interviews from the film to live on a new website dedicated to the study of Japanese traditional arts as they were practiced in the WWII camps, which will be available to the public in the next year or two. Because of her koto music stemming from the camps, Shirley feels her koto music is a direct connection to cultural arts in camp and the teachers who taught her mother to keep the koto music tradition going today.  She would not have this music in her life if not for the teachers who taught her mother. For this reason, it has become a very special part of her life.

Shirley is also involved with a program educating Berkeley public elementary school students about the music of the WWII American concentration camps along with flutist and Santa Clara University music professor Rayõ Furuta, and administered by Pc Muñoz, the Director of Education and Community Engagement at Freight & Salvage.

In 2012, Shirley was honored by the Hokka Nichibei Kai Japanese American Cultural Association of America by being inducted into the Bunka Hall of Fame for her life-long dedication to teaching and performing on the Japanese koto. She has received support and funding for various projects from the City of Oakland, the SF Japantown Foundation, the Berkeley JACL, and the Apprenticeship Program from the Alliance for California Traditional Arts to train future artists for the continuance of Japanese koto music into the future.

The New Moon Newsletter from the Alliance for California Traditional Arts featured a Q&A with me about my experience performing with the SF Symphony recently in their CURRENTS series, interview by Lily Kharrazi, “Traditional Koto at the Symphony”,

Join us for a Peace Day Commemoration on the lawn of North Branch Library. Listen to beautiful koto music by Shirley Kazuyo Muramoto, learn how to fold an origami crane, and hear about the story of Sadako Sasaki, a young girl who lived through the bombing of Hiroshima, but died years later from the effects of the atomic bomb. She was made famous for folding 1,000 origami cranes in the hopes that her wish to survive would be granted.

Ages 8 and up and families are welcome. Sponsored by the Friends of the Berkeley Public Library 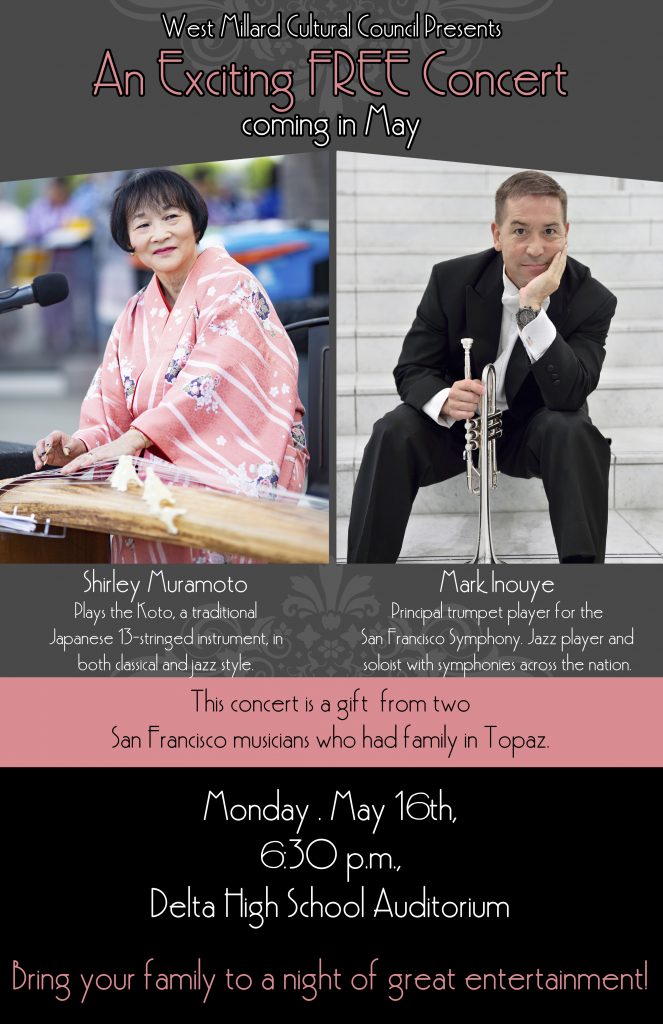 This Sunday, April 24 at 12:30p, Chikushi Kai teachers and students of the Bay Area will be performing at the Nikkei Matsuri, our first in-person music program! We will play a koto piece from an anime as well as other koto and shakuhachi selections. We will be on the indoor stage where there will be other displays, as well. There will be booths and bands, martial arts and taiko, and food! So come on down and join us for a day of music and fun!

April 10th 2022 at Oakland Buddhist Church, 825 Jackson Street, Oakland, outdoors. Talk about how Buddhist churches were places were Japanese arts were and continue to be offered including Japanese language schools and performances that occurred in the 1920s through 1940s at the Buddhist Church of Oakland, along with koto demonstration.

– This year, the GVJCI Day of Remembrance (DOR) 2022 event will be held online via Zoom on Saturday, February 26th, 2022 from 2:00pm to 4:00pm. This year’s DOR theme will be “Camp Creativity: Resilience Through Art” with the intention of highlighting the courage, healing, and creativity of camp survivors through fine and performing arts. Specifically, we will be sharing works ranging from cultural performances, big band music, and more. From February 22-25, the GVJCI will be publishing these stories through special video interviews, film clips, music playlists, and photographs. The February 26th live program will feature interviews with some of those featured throughout the week of the virtual DOR on the GVJCI website. From these collections, viewers will gain new knowledge in the experiences of Japanese Americans incarcerated during World War II. We hope the community will be able to walk away with a greater understanding of the history of this time period and the fortitude and resilience of its survivors.

Koto master and curator Shirley Muramoto joins San Francisco Symphony musicians in a program that celebrates the elegant power of an instrument to connect across genres and reflect the endless diversity of our community.

Shirley Muramoto expresses, “I called [this program] ‘Niji’ because it represents a rainbow of different people and different things in the Bay Area that I’ve had the fortune to connect with and collaborate with and share music with.”

Currents is sponsored by Chevron

It has been almost 80 years since the Executive Order 9066 during World War II led to the forcible relocation of approximately 120,000 Japanese nationals and Japanese Americans, about two-thirds were American citizens, into American concentration camps.  Though much has been researched and written about this American history, there is still a subject which has not been thoroughly researched, and that is the story of how those incarcerated survived the prison camps for the four to five years they were imprisoned there.
The Hidden Legacy project researched and collected stories from former incarcerated artists and Sansei and Yonsei students who learned from some of these teachers. The questions were: how and why did traditional Japanese arts in the camps continue, how they used creativity to practice them, and how they fashioned equipment, kimonos, instruments and so on to be able to practice them. These arts played a critical role in the lives of those incarcerated to continue to survive and help them be resilient. After the war as many felt these traditional arts would make them appear “un-American”, many shunned these arts.  Now, we are learning that traditional cultural arts and music aid in survival and continue to do so today as we learn how the arts help us to understand ourselves.  Trying to survive in this pandemic, we have found that the arts also help us today to stay resilient. This project emphasizes the importance and benefits of keeping traditional arts alive not only for ourselves but for future generations as well.

The documentary film, “Hidden Legacy: Japanese Traditional Performing Arts in the WWII Internment Camps” (2014) can be seen on YouTube